When Disneyland was created in 1955, an orientation to the parks was held for all the newly hired “Cast Members.” This orientation program built by Van France and Dick Nunis became known as “Traditions”. It emphasized the heritage of what was then Walt Disney Productions, and declared the importance of customer service. “We Create Happiness” was a service vision put in place to suggest that no matter what your role was in the park, your job was to make the Guests happy.

Though “Capacity” later evolved to  ”Efficiency,” these standards have endured the test of time. As new executives  have come on board, management in the parks have locked arms and insisted that these Four Keys stay intact. They are taught to all Disney Cast Members at Disneyland and Walt Disney World. They are prioritized as such, and they are powerful tools in that they are easy to remember and can be used as a litmus test for excellence, whether thinking strategically, or whether acting in the moment on the front line. So powerful were these ideas that I designed entire programs at the Disney Institute around these concepts, and have since gone on with my own business to help companies design and implement their own service standards and values. In time however, Disney management also wanted to define more specific guidelines or behaviors. This resulted in Disney’s Seven Service Guidelines. They even at some point tied them to the Seven Dwarfs:

These guidelines went on for many years, but they were a little hard to remember, and they were missing some other important service behaviors. So, a few years ago, Disney’s Service Basics were created. There were four areas of focus with key behaviors listed underneath:

Beneath each of these were specific behaviors like “Smile” and “Look approachable” for the first one listed. Moreover, they identified specific actions expected of Leaders, and the behaviors that tier up to those actions. This was critical, in that having a great Guest experience requires having management supporting that experience. The problem with Disney’s Service Basics is that they really didn’t align with Disney’s original Four Keys. They simply sat separately. We saw the same thing as we worked with clients as varied as hospitals, government agencies, or trucking companies. We began creating behaviors that aligned with each of the core standards that were established. That way, there was a tiering effect for learning. A new employee going through an orientation might only remember the 4-5 standards being shared, but in time they could learn the behaviors that go with them.

So it wasn’t too surprising when I heard a couple of months ago that Disney had decided to do the same thing. They now have a tiered effect. The first are the four keys or values. These are followed by 2-3 key actions for those standards. Then there are behaviors listed under each. Here are they are in their new form:

Essentially, what has happened is that the Disney Service Basics have been largely evolved to the key points listed under Courtesy, with new actions and behaviors directed toward the other three Keys. In particular, “go above and beyond” could be applied to all Four Keys, so under Courtesy it was modified to “go above and beyond to exceed Guest expectations”. Research also showed that international partners mentioned the importance placed on showing attention toward seniors, and not just children, so the wording has been modified to “I am courteous and respectful to Guests of all ages.” So now beneath each of these bulleted action points are 2-3 specific behaviors. For instance, under the first bullet point for safety, “I practice safe behaviors in everything I do” is:
They have also kept the Disney Leader Basics and have created the same tiering effect between actions and behaviors.

We applaud the work that Disney has done here and believe that it will refocus energy around creating a great Guest experience. Moreover, this pattern is very helpful to organizations who want to create great customer service in their own organization, and I’ll give some examples of this as well. The expression “simple but not simplistic” applies here. You keep to several key principles or values, but then you work very hard to implement those concepts every day in delivering great customer service.

Disney’s Four Keys serve as a compass for creating happiness and serving others. More than fifty-five years later, these Four Keys serve as the foundation for everything Disney does. Any organization would be envious to have several key standards stand that test of time. It is at the heart of what has made Disney the powerful name it is today.

To learn more about the Four Keys, and other great examples of customer service, check out The Wonderful World of Customer Service at Disney, available in paperback or Kindle version at Amazon.com. 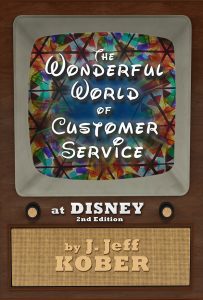